© San crossing the Makgadikgadi salt pans. Jack's Camp
The Central Kalahari is a very dry area and during the winter months game viewing can be limited. However with some knowledge of the habits of the animals of the Kalahari these dry months can be very productive.The Kalahari is not a true desert, and the dunes and valleys are covered with grass and woodland which provide a haven for a multitude of creatures.When the rains fall in the Kalahari the valleys green up and attract huge herds of antelope which in turn attract predators in numbers. Game viewing in the Kalahari can be as dramatic as in any other safari destination in Africa.

The seasons of the Kalahari consist of very dry and cold winters, (April to October) and very hot, wet and green summers (November to March). Wildlife is found throughout the year in the Kalahari, only more concentrated during the wet season.

The Kalahari can be visited year-round for great game viewing. However it is generally thought that the rainy season is the best time to view wildlife, as the herds concentrate in the valleys to feed on the lush grasses that have come up after the rains.Due to the scarcity of food in the dry season, wildlife disperses over larger territories and home ranges making them more difficult to find. Nevertheless there is always plenty to see in the Kalahari.

The Kalahari has some unique bird species which can be seen all year round but it is during the rainy season that the area comes into its own as a birding destination. Raptors are plentiful and migrants add many species to checklists. 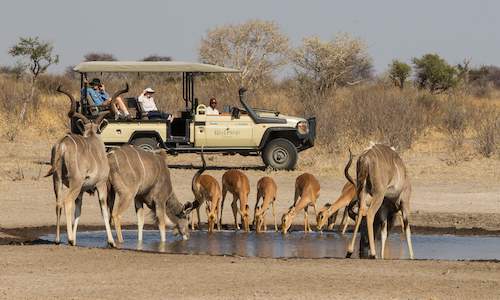 Central Kalahari Game Reserve is the second largest wildlife reserve in the world and the largest and most remote reserve in Southern Africa...more
Botswana Safari Tours and Game Lodges
©2022 Siyabona Africa (Pty)Ltd - Private Tours and Safari