A visit to the Panhandle would not be complete without an excursion to the Tsodilo Hills. About 40km to the west of the Panhandle lies a rocky outcrop known as Tsodilo Hills, a little visited area that boasts fascinating cave paintings and walking trails.

Tsodilo Hills consist of four large pieces of rock, rising unexpectedly from the dry expanse of desert. The Bushmen that lived here referred to the bigger rock as the 'male', the smaller one was known as the 'female', and the smallest one was the 'child'. According to legends the fourth hill was the male hill's first wife, whom he left for a younger woman, and who now prowls in the background.

The Tsodilo Hills form one of the most historically significant rock art sites in the world, It boasts 500 individual sites representing thousands of years of human habitation. Nobody knows the exact age of the paintings although some are thought to be more than 20 000 years old, whilst others are merely a century old.

Tigerfish and bream abound in the Panhandle

The Panhandle has become more accessible with the tarring of the Maun/Shakawe road. With the Panhandle being deep and fast-flowing it is ideal for both the fighting Tigerfish and bream. Seventeen species of fish can be caught in the Panhandle area. Bird watching is also outstanding in the region's tall, shady, riverine forests and many resident and migratory birds can be seen along the river. 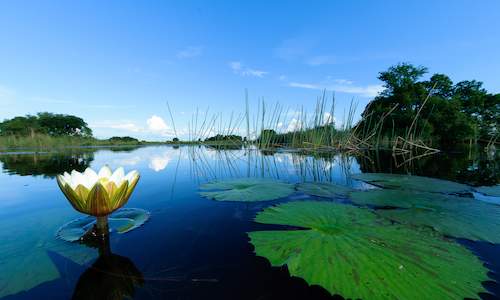