© Cheetah bring down a buck
The Okavango Delta is an ecological marvel - a wetland in a desert - and the wildlife is as dramatic as the delta in the desert concept that supports it.

Wildlife of the Okavango Delta

Here is a piece of Africa that plays to its own rules, a place where the science of animal behavior is rewritten.

From water-loving lions to elusive antelope the Okavango is truly a naturalists dream. Here there is a wet and dry season - but with a slight variation - the water level is the lowest during the wet season and at its highest during the peak of the dry season.

The Okavango Delta is a place of extreme beauty, a place where the creation of the earth could have happened and where the wildlife is merely an afterthought of the creation.

Open grass plains that become lakes, permanent channels flanked by a variety of vegetation and islands surrounded by magnificent stands of some of Africa's iconic trees are the canvas for a wildlife experience unrivalled on the continent.

Eco-systems of the Delta

The Okavango Delta has numerous eco-systems, allowing it to support a wide range of wildlife. Islands varying in size from termite mounds to the huge Chief's Island support riverine woodland, mopane forest, open grassland and savannah bushveld. These islands host most the species that occur in northern Botswana.

The permanent delta areas of deep channels, papyrus stands and reed beds are home to many breeding birds and the elusive sitatunga antelope. The sitatunga is a water-adapted species that lives in permanent swamp areas of Africa. The long splayed hooves allow the sitatunga to negotiate papyrus beds with ease.

The Okavango Delta shows animal behavior not seen in many other wilderness areas of Africa. Due to the annual flooding of the delta huge pieces of the home ranges of animals are covered by water, but instead of moving away from the area the animals often use the water to their advantage.

Buffalo will spend long hours in the shallows of the floodplains feeding from the soft vegetation in the water.

Lions of the Okavango, sometimes referred to as swamp cats, will use the water to get closer to their prey, where, instead of stalking across land, they will keep out of site by rounding an island through the water.

Personal observations have included most mammals of the delta walking or swimming across floodplains and channels when the water is high. The threat of crocodiles on the floodplains, although present, is limited due to the shallowness of the water.

Baboons show interesting behavior when crossing water with a variety of styles being exhibited. Some will run across screaming constantly, others will feel their way slowly whilst others simply get up on their hind legs and walk across. Mothers with babies will walk swiftly across with the baby getting a good dunking.

The birdlife of the Okavango Delta is prolific, in particular the southern reaches where the waters from Angola find their rest. Huge gatherings of birds can be seen at certain times of the year with the onset of natural events.

With the arrival of the floodwaters many crustaceans and insects will be flushed by the advancing waters and this again produces a gathering of birds in their hundreds.

In some parts of the permanent delta birds gather in colonies to breed. Herons, egrets and cormorants can often be found in great numbers together at breeding colonies. During the summer months, and with the onset of the rains, the delta is alive with colour and the migrant birds add to the vibrancy.
Next - Images

Elephants of the Okavango 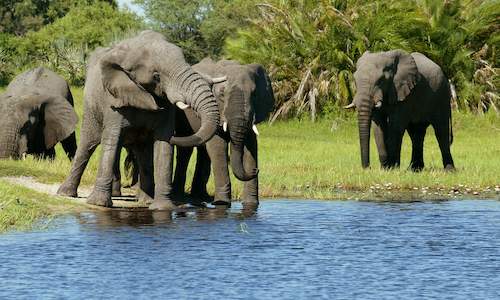 One of Botswana's biggest draw cards is the number of Elephants that live in Northern Botswana. These majestic animals follow ancient migrat...more

Hippo of the Okavango 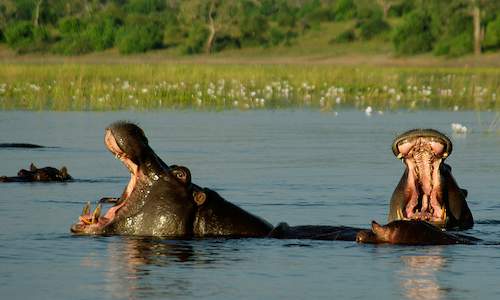 One of the iconic animals of the Okavango Delta has to the Hippo, and there are many of these rotund creatures that call the Delta home. The...more

Lions of the Okavango 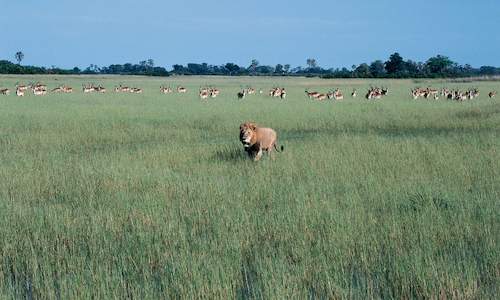 Lions are not the first animal that comes to mind when you think of an inland Delta, but the Lions of the Okavango have adapted to their wet...more
Botswana Safari Tours and Game Lodges
©2022 Siyabona Africa (Pty)Ltd - Private Tours and Safari