The Khwai Concession is a large area dominated by Mopane forests on the north eastern edge of the Okavango Delta.

This vast area belongs to the local community and they now offer wonderful Botswana safaris in the region. Migrating herds of Elephant favor the Mopane forests in this area and there are usually good wildlife sightings.

The Khwai Concession is an 1800km (180 000 hectare) area which is situated in the north eastern Okavango next to the Moremi Game Reserve. It was formed by the local Khwai villagers and is managed by the Khwai Development Trust. The area used to be a hunting concession, but is now actively managed as a conservation area.The villagers took over the area when they moved out of the Moremi region when the Moremi Game Reserve was formed. The local community now runs eco tourism initiatives, actively conserve the environment and manage the wildlife in the concession.The Khwai River flows through the concession - it is the first major water source that animals migrating down from the Linyanti concession encounter and there is always a high concentration of game along the river.

The area is made up of sweeping grasslands, riparian forests and floodplains. The floodplains are flooded most of the year and there are lagoons covered in blue and white water lilies. The area also has large tracts of Mopane forests. The riverine woodland consists of Camelthorn, Knobthorn, Appleleaf and great stands of Leadwood trees.

The Khwai Concession is a good area to see Roan and Sable Antelope which are relatively rare. On your Botswana safari you might see Kudu, Tsessebe, Wildebeest and Zebra. Huge herds of migrating Elephants enjoy the Mopane woodlands of the interior of the Khwai area.

There are fairly stable populations of large predators such as Lion, Spotted Hyena and African Wild Dogs found here and if you are lucky, you may also spot Leopards.

The area has a good mix of habitats and you will see a good mix of wetland and Kalahari species. During the summer months migratory birds also come through. You might see Verreaux's Eagle Owl, Senegal Coucals and Long Toed Lapwings.

As this area is mostly dry, you can visit at any time of the year. There are not many activities that take place in this part of the Delta with the camps focusing on game drives and game viewing. The region is mostly made up of Kalahari sand veldt, and the Mopane forests are home to numerous Elephant. 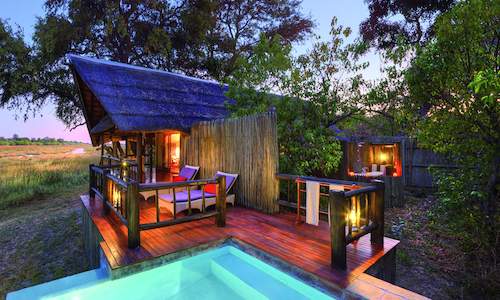 Khwai River Lodge is one of the oldest game lodges in Botswana. It is located 8km (4.9 miles) north-west of the north gate of the Moremi Gam...more
Botswana Safari Tours and Game Lodges
©2022 Siyabona Africa (Pty)Ltd - Private Tours and Safari