Stanley's concession is just outside Maun, making it easily accessible for an Okavango safari. The area is home to many Impala, Tessebe and large Buffalo herds, and this is a good area to try and see Cheetahs.This area of the Okavango Delta is just outside Maun. It is one of the southernmost reaches of the Delta and as such, is one of the last areas that the flood waters reach. There are several camps in the area that offer exciting activities ranging from Mokoro trips to game drives and guided bush walks. This area is known for its large herds of Buffalo.

Most of this area of the Okavango is covered in open savannah grasslands. Many areas are only occasionally flooded and as such they are much drier. There is a lot of dried sage and Cradle Pod Acacia shrubs that dot these open grasslands.

There are areas of riverine forest along the Delta channels which has vegetation typical of the wetter areas of the Delta such as Jackalberries, Leadwoods, Marula's and Sausage Trees. In the marshy areas there are lots of reeds, Miscanthus Grass and some rounded Hippo Grass.

Impalas and Tsessebe are the most common antelope you will see on your Okavango safari in Stanley's concession of the Delta. Red Lechwe and Reedbuck are common in the wetter areas, while in the drier regions and forests Kudu, Giraffe and Warthog occur. Elephant and Buffalo are occasionally seen, though they gather in greater numbers in the dry season as they search for areas of permanent water.

Lion are the main predators in the region. Cheetahs are often seen hunting or lounging on termite mounds in the areas of open grassland. This is one of the better areas in the Delta to possibly see these speedy cats. Wild Dogs occasionally pass through this region as they have a vast hunting range.

This area is home to a wide variety of birdlife as it has many different habitats. Birds commonly seen around the camps in the area include Mourning and Cape Turtle Doves, Red Billed Quelia, Long Tailed Shrikes, Lilac Breasted Rollers as well as both Long Tailed and Glossy Starlings.

In the dry regions and forest edges you will find Meyers Parrots, Swainson's and Red Billed Francolin's as well as Sand Grouse, Helmeted Guinea Fowl and Yellow-billed Hornbills. On the food plains and wetlands you may occasionally see some endangered Wattle Cranes.

On the raptor front, the area is known for its sightings of Bateleur Eagles as well as Black-Breasted and Brown Snake Eagles.

If you want to see the most wildlife it is better to visit in late winter when the wildlife congregates around areas of permanent water. Mekoro trips can only be done much later in the year from about September and for a limited time as this region floods last. 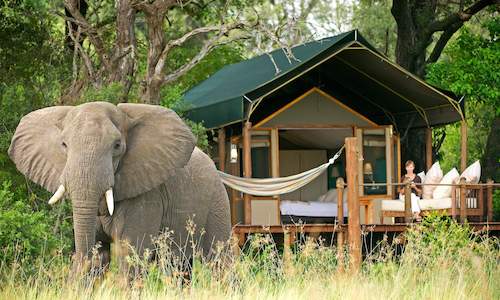