The Duba region of the Vumbura Concession was made famous by its pride of Lions that hunted Elephants. This behavior seems to have stopped now, but region is still an amazing stop on an Okavango safari. The region is home to large herds of Buffalo and numerous prides of Lion.This area of the Delta is situated in close to what is referred to as the Panhandle area where the Okavango River starts to spread out and form the Delta. It covers 900km of the northern Okavango. The western parts such as Duba Island are characterized by seasonal floodplains and have many small palm islands.

The area has many diverse eco systems from areas of permanent swamp and seasonally inundated flood plains. There are also many drier areas that have thickets of acacia woodland and areas of tall Mopane trees and Kalahari Appleleaf stands.

Vumbara is a pretty and diverse area of the Okavango which has wide open floodplains studded with palm islands which have formed out of anthills. The Vumbara and Duba Plains are leased from the Okavango Community Trust from 5 communities in the area with the benefits of eco tourism shared among the communities.

In the past the Lions of the Duba region had become specialists at hunting Elephants as food was so scarce. Now that the area is wetter and their more common prey such as Buffalo is available they seem to have stopped hunting Elephant.

The Vumbara Plains are home to many of the Okavango's larger mammals such as Hippo and Elephants. The area is home to Botswana's largest concentration of Buffalo which number in the thousands. As many African's know, where there's Buffalo there are certain to be Lions not far behind. There are many Lion prides in this region.

You will also see a high density of the other common antelope of the Okavango such as Tsessebe, Impala, Lechwe, Kudu, Zebra and Wilderbeest. The Vumbara Plains are also renowned for its high population of Waterbuck.

The predators are equally well represented on the Vumbara and Duba Plains and you are likely to see Lion, Spotted Hyena, Leopards and Wild Dogs. You may even see Cheetahs in the drier areas towards the Mapula Reserve where they enjoy hunting on the drier wide open savannahs. Smaller predators include Aardwolf, Bat-eared foxes and Black as well as Side striped Jackals.

As with just about any part of the Okavango Delta, the birdlife is excellent. Rarer species that you can look out for include Rosey-Throated Honeyclaws, Black Coucals and Wattled Cranes. The flood plains are home to a wide variety of waterfowl, such as many species of Kingfishers including Malachite, and Pied Giant Kingfishers.

You must also keep an eye out for Slaty Egrets which are only found in the Okavango and a few other wetland systems. Black winged Stilts and Sacred Ibises are common as are Spoon Bills.

As with most areas, if you are hoping to see lots of wildlife, then its best to visit during the dry season in the winter months. This is also the best time to enjoy water activities as the annual flood provides more water.

If you want to see the amazing birdlife then it is better to travel in the wetter summer months when the migrant birds have arrived and many of the birds are breeding. Of course the best time for taking photographs is in the dry winter season as your equipment will stay dry.

The camps in the Vumbura and Duba Plains are all accessed by chartered or scheduled flights as the area is inaccessible by road. This makes the camps really remote, meaning that they can offer you an exclusive experience. 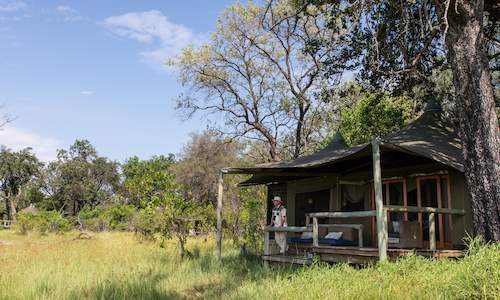 One of the camp's attractions is the outdoor dining area. Wooden decks have been built on the floodplains and dinners under the stars are a ...more 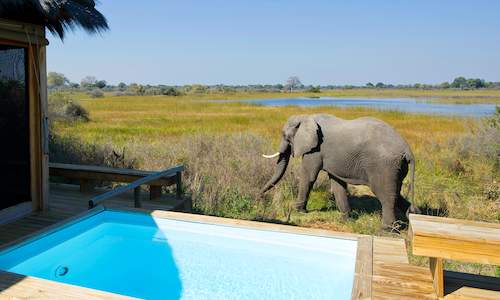 Vumbura Plans can offer both water and land activities as this area has scenic waterways and is also close to the Okavango's outermost open ...more
Botswana Safari Tours and Game Lodges
©2022 Siyabona Africa (Pty)Ltd - Private Tours and Safari