The Nxabega Concession is a small area right in the heart of the Okavango Delta and has stunning open floodplains where you can see Lechwe and even Giraffe on your Okavango safari. You can enjoy a number or exciting water excursions in this concession.The Nxabega area is located in the middle of the south western areas of the Delta. This small concession has many different habitats and a wide variety of species. There are several camps and Okavango safari lodges in this area, managed by different companies, so you will have a choice of safari accommodation.

The area around Pom Pom is more open, with picturesque flood plains dotted with small islands which have a profusion of Fan and Date Palms. These floodplains are often flooded between May and September.

Towards the Kanana region of the concession the area is drier and there are large areas of wild sage, and patches of woodland which include quirky Sausage trees, Jackalberries, Knobthorns, Rain trees and Marula trees.

The waterways are lined with Papyrus and Miscanthus Grass all presided over by Giant Water Figs. The Nxabega area is more heavily forested and there are more Acacia trees, so the chances of seeing Giraffe in this area are good. The plains around this camp are covered in Hippo Grass, creating perfect hiding spots for many animals including the elusive Sitatunga.

Due to the number of Acacia trees in this area, you are likely to see several Giraffe in this area while on an Okavango safari. There are also numerous other common Delta species such as Lechwe, Impala, Wildebeest, Zebra and Baboons. You may also see the occasional Tsessebe and Steenbuck. There are smaller resident herds of Elephants, although they do not gather in the same numbers as in the northern areas of the Delta.

Lion and Hyenas are often seen. Leopards are common in the riparian forest and the best time to see them is on a night game drive or early morning game drive. Wild Dogs occasionally pass through the reserve - always a fantastic sight. Black backed and Side Striped Jackals are common in the concession.

With it varied habitats the Nxabega Concession supports a wide variety of birdlife. In the areas of permanent floodplains around Kanana you'll see Squacco Herons, Yellow billed, Marabou and Open billed Storks, Cormorants and Egrets - including Black Egrets and Slaty Egrets. You may see Black Crakes as well as nesting Bee-Eaters and many different species of Kingfishers.

Raptors are well represented in the drier regions of the concession and you may see Tawny, Bateleur, Martial and Wahlberg's Eagles.

You can enjoy water activities year round on your Okavango safari at the camps based on the deeper channels, as well as game drives, bush walks and fishing on catch and release basis.

To stay at camps in this area you have to book in advance and fly into the camps private airstrip. 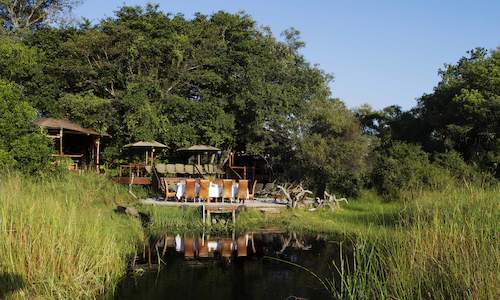 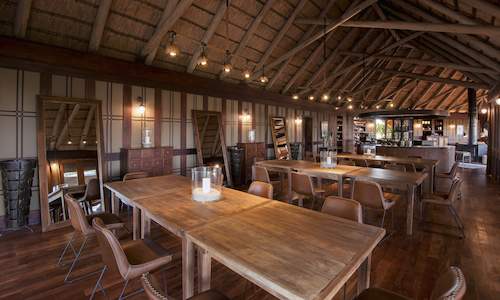 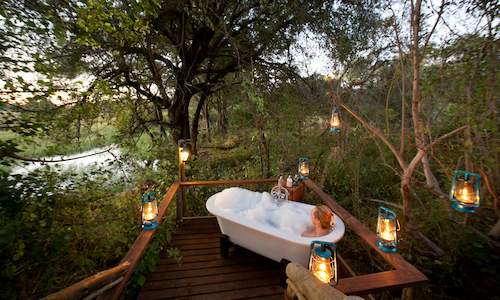 Pom Pom is a luxury camp in a remote site of the inner delta. Pom Pom Camp is designed for the wildlife enthusiast, the photographer and tho...more
Botswana Safari Tours and Game Lodges
©2022 Siyabona Africa (Pty)Ltd - Private Tours and Safari